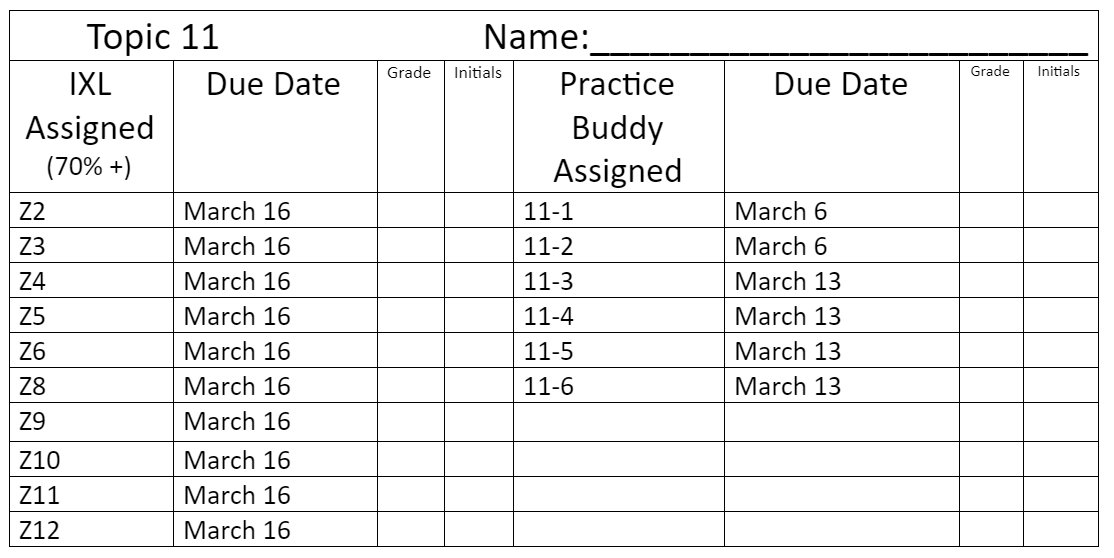 Click HERE for a printable copy.
MRS. SMITH
Check out our Reading class Google Classroom - There are many activities you may do to keep your reading skills sharp while you are out of school.  :-)
**Read for 20 minutes every night:-)
READING - Check out our Wonders ​ELA program.  Log on and look at your home to school connection tab.  Please take a look at your child's recent test score online.
Reminder:  Tests are not on a specific story any longer but will be on the skills and strategies practiced in class.
-Scholastic Book Orders:  To order online: class code is H3RDT or checks to
Scholastic Books may be used.
MRS. RAMIREZ - Language Arts​
*Spelling Homework:  Unit 3 Week 5 Spelling Practice due Friday, March 13th.
​*Spelling Test - Friday, March 13th.
MR. DELONG - Science
*OPTIONAL SCIENCE LEARNING OPPORTUNITIES:
-Activities available in my Google Classroom
-Gizmos
-ST Math
*Click here for the Science Fusion Online Book (If you get an access denied message,
​      copy the URL, open a new internet window, and paste the link there.  It should open then.)
*Click here to download a copy of the current study guide.
*Click here to access Science Fusion Digital Lessons and more.  (You need to be
​      logged into your Think Central account to access the digital lessons.)
*SCIENCE TESTS and SCORES are shared to the students' BHASD Google Drives so
students can view the results of their tests on any computer by logging into their
BHASD Google Account.  Click here to access science grading information.
MR. CONRATH
Social Studies
Midwest State map due date to be determined later.
Link to my webpage:  www.cconrath.weebly.com
3-12          We reviewed the Midwest state and capitals.
3-11          We reviewed Lesson 1, and then began to learn about colonial small towns in New
England.  We learned they were self-sufficient, and common features included
​                       a town common, a meetinghouse, and stocks!
3-10          We discussed an example of a colonial triangular trade route that
went from New England to Africa to the West Indies and then
back to New England.
3-9            We learned that the economy of the Southern Colonies was also
based on farming.  Cash crops included tobacco, rice, and indigo.
We also worked on finishing the job signs.   They look awesome!!.
3-6            We learned the economy of the Middle Colonies was based on farming and mining.
We then continued to work on the job signs.
3-5            We learned the economy of the New England colonies was based on their natural
resources, getting wood from the forests and fish from the oceans.  We then
worked on the job signs.
3-4            We took the Southwest State test and then worked on our colonial job signs.
​3-3            We reviewed for the Southwest State Test and started to work on the
​                        colonial job signs.
3-2            We reviewed some more colonial jobs and also reviewed the Southwest states for
the test on Wednesday.
2-28          We reviewed more colonial jobs and compared them to jobs today.  I also passed
back the Chapter 5 tests while students reviewed for the Southwest state test
on Wednesday.
2-27          We began to review the Southwest state and capitals.  We also learned about various
colonial jobs and compared them with jobs today.
2-26          We learned that an apprentice is someone who learns a job from a more experienced
person who was called an artisan.  Apprentices had to work long hours and
several years until they could become an artisan, a person who made things
by hand.  But most colonial children did chores on their homes and learned
​                        how to do and make things from their parents.
2-25          We reviewed the colonial regions with a google classroom activity.  Then we reviewed the
Build a Colony website results, and then we began to get a preview of Chapter 6.
2-24         We learned about the Southern Colonies, where many farmers grew tobacco and rice.
We learned how Lord Baltimore started the colony of Maryland for the religious
freedom of Catholics.  We also learned that James Oglethorpe started the colony
of Georgia as a place where debtors from England could lead better lives.
2-21          We learned about William Penn and how the colony of Pennsylvania got started.
We also learned about the Quakers and Philadelphia.  We also learned about
the Lenni Lenape Indians who lived in this area.